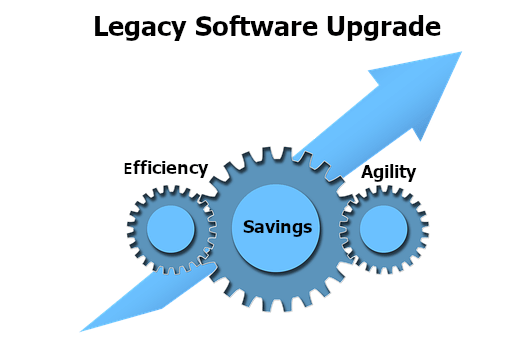 The client, who is a top provider of conferencing software and communication services, contacted Nexus Software Systems to upgrade their legacy system. Their primary software runs on Windows servers and was created before the year 2000. This legacy software was not working. The system administrator was unable to bring the system up. It had been down for more than a day.

The original software developers thought that the company’s core software product, a communications system, would not be able to run on a Windows server version newer than 2003. Because of this assumption, the company felt trapped and locked in to one particular vendor. Most server providers today do not offer Windows server versions prior to 2008. The hosting providers that do, charge a high monthly fee.

In addition to having to pay a high monthly fee to host their applications on an old version of Windows, their application was becoming unstable and was frequently down. Causing a lot of stress, increased effort and loss of customers.

Software written for older versions of Windows may rely on no longer supported system components. The older Windows operating systems receive no patches or security updates from Microsoft. In this case, the primary applications were written in C and C++ 98. Since 2011, the C++ programming language has received many improvements in terms of efficiency, performance and security.

The Benefits of Modern C++

First, the company’s existing system was made functional. Then Nexus Software Systems examined the state of the system and determined what would be involved in upgrading the software to be able to run on newer versions of Windows. A comprehensive upgrade plan was developed that would enable the company to maintain their day to day business operations, while progressively migrating their system to a new Windows server. The entire migration took less than one month.

The upgrade plan included re-writing the core product’s applications in modern C++, implementing the company’s web pages that were written in classic ASP in .Net (C#) and saving all of the company’s existing data and files that had built up over 20 years on low cost cloud storage.

Legacy Software Problems and How to Fix Them

The result of the legacy software upgrade more than saved the company from going out business. All of the company’s software was able to be migrated to new Windows servers. The company’s core software products are now much more efficient, secure and highly optimized for performance.

How to Achieve Better Results by Optimizing Software

The re-written software was designed to be easily maintained and modified or upgraded in the future. The monthly cost for the new cloud Windows servers with Solid-state drives is a small fraction of what they were paying for the old Windows servers.

Because of their software modernization, the company has been able to keep their existing customers happy, have attracted many new customers and are now thriving.

Learn how you can easily get your legacy software upgraded